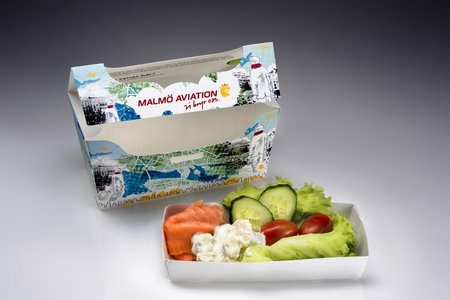 Everything from cereal boxes to egg cartons should be disposed of in the recycle bin rather than being dumped in the garbage. A little recycling can really go a long way in helping the environment. Aside from individuals, some companies are also striving to make their products more sustainable. A Swedish Airline company is now going a step further in making their food boxes compostable.

Malmo Aviation is an airline agency based in Sweden. It has recently released a new form of food boxes that are made from a special type of paperboard that is not only compostable but also saves space and helps extends the shelf life of the food it holds.

The paper is made from a material called Invercote, which was designed by Malmo Aviation along with the catering company Pcknick and Omikron. Invercote is designed to keep the food inside it fresh and prevent the contents from fogging. It is made from bioplastic, which means that it also can be thrown into the compost heap along with other scraps of food. This makes it far more efficient than the standard food box container.

Aside from being environmentally friendly, they are also smaller in size and weight. This makes them easier to handle, load and serve to passengers during a flight. Tony Noren, who is the CEO of Omikron, commented that the new food boxes can reduce the need for storage space by half in airliners. In addition, the food will also retain its freshness longer and is less impactful on the environment.

With Invercote boxes, the packaging is just as biodegradable as the food itself. This means that it can be used for composting with the material being returned to the source from which it was derived from. This way, nothing is gone to waste and everything is reused and returned to the environment.