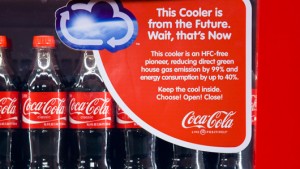 Coca-Cola Co. seems to be saying “Love Mother Earth” with their new vending machine that chills soft drinks and the planet at the same time.

Most vending machines, you see, rely on a certain type of refrigerant known as hydrofluorocarbons (HFCs), you may have learned about these little devils in high-school. They are a chemical with power to cool the air, but they can also be 1,430 times more harmful to the climate than carbon dioxide.

For this, Coca-Cola’s new refrigerant of choice is CO2 indeed.

The publication of the Velders Report in 2009, predicted a dramatic rise in HFC use due to steady growth in the refrigeration industry. The report mentions natural alternatives, including CO2, ammonia, and hydrocarbons (propane and isobutene).

CO2 removes heat from the air; this makes it a natural refrigerant. As it evaporates, it also absorbs the heat, chilling the air inside the machine. CO2 must be used at a much higher pressure than other refrigerants, necessitating stronger pipes.

After Coca-Cola realized that the largest part of its carbon footprint, 40%, came from its refrigeration equipment, it started testing HFC-free technologies debuted its first climate-friendly machine in 2002.

PepsiCo also installed 35 new, HFC-free vending machines in Miami just before the Super Bowl. These use hydrocarbons — like propane and butane — refrigerants which are already popular in Europe. The Ben & Jerry’s ice cream company is launching its own version of this technology at stores in the Washington, D.C., and Boston areas. Also, General Electric is seeking approval to sell home-use refrigerators in the U.S. using a hydrocarbon refrigerant.