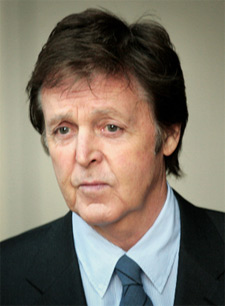 Veteran Vegetarian Beatle Paul McCartney, always outspoken about animal rights has been making noise in defense of the innocent monkeys used by the National Aeronautics and Space Administration (NASA) in experiments to determine the effect of space travel on human beings.

Paul wrote in a letter to NASA:

“I believe NASA has the ingenuity to investigate the health effects of space travel without confining and experimenting on animals as was done in the old days. It would be terribly disappointing if in our zeal to explore new frontiers and to learn about the fascinating universe where we live we began to regress in our treatment of the animals with whom we share this planet.”

Now don’t get the mop head wrong. Sir Paul has always been a big proponent of space exploration, hence Lucy In The Sky With Diamonds. Knocking NASA is something new to the legend. In the past, Paul has even performed for the crew of STS-114 and even teamed up with NASA to broadcast Beatles music into outer space.

But when it comes to monkeys this Beatle is twisting and shouting over animal cruelty!