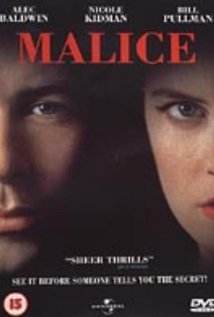 The doctor insists that he found cancer in the man’s penis and that it had to be removed, says the physician’s attorney. The surgery was supposed to be a circumcision and was never actually authorized nor was given a chance to seek a second opinion.

It reminds me of the movie Malice, when Alec Baldwin is performing an operation on Nicole Kidman and while she is under the knife Dr. Baldwin says he must remove the patient’s uterus and husband Bill Pullman gives permission. Upon waking she sues Pullman for giving the permission without her consent, before protagonist, Pullman, realizes at the end that the whole things was a set-up to squeeze him dry.

Jury selection will begin Thursday in the lawsuit brought by Phillip Seaton of Waddy and his wife, Deborah, against Dr. John Patterson of Louisville.

The Seatons originally sued Dr. Patterson in Shelby County Circuit Court in 2008. Now in his 60s Seaton was having the procedure on Oct. 19, 2007, to better treat inflammation. The lawsuit claims Patterson removed Seaton’s penis without consulting either Phillip or Deborah Seaton.

George said during a pre-trial hearing on the 2nd of August that the case comes down to whether jurors believe the amputation “was a necessary part of the surgery.’

George said that the doctor’s post-surgical notes show that Patterson thought he detected cancer and removed the penis.

However, George added, the situation was not an emergency.

Robinson said previously that Patterson, a Kentucky-based urologist, had permission to perform any medical procedure deemed necessary and that the doctor found cancer in the organ while the patient was under anesthesia. Robinson said that
Patterson “had no reasonable option” but to remove the cancer.

“Mr. Seaton’s problem was not the surgery, it was the cancer,” Robinson said in 2008.

“I’m optimistic we can seat this jury,” Robinson told the press during the pre-trial hearing.

The Seatons want unspecified damages from Patterson for “loss of service, love and affection.”

The couple also sued Jewish Hospital, where the surgery took place. The hospital has settled with the Seatons for an undisclosed sum.