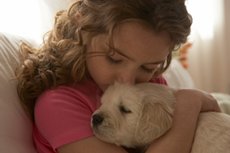 Dogs have often been touted as a man’s best friend. However, it may be more accurate to say that it is an infant’s best friend. A new study done in Finland suggests that infants who grow up in a household with either a dog or a cat are less likely to suffer from coughs, runny noses and ear infections. These babies were also less likely to need treatment that includes antibiotics.

While it is not currently known how having pets in the home can contribute to an infant’s health, one theory suggests that the dirt and allergens that a pet brings into the home may actually be good for a child’s immune system.

The research consisted of almost 400 infants. The parents would keep record of the child’s health as well as how often their child had contact with pets.

The study shows that before the babies reached their first year, close to 300 of them had contracted a fever at least once. 335 also suffered minor bouts of coughs with 157 having an ear infection and almost 200 having to take some form of antibiotics.

It is believed that all the germs and bacteria that a pet attracts into the home forces a baby’s immune system to work harder, and therefore develop more quickly.

Of course, the study does not prove for certain that pets lead to healthier children, so there is no need for expectant parents to go to the nearest pet store and bring home a new puppy or kitten.