Can you believe it? Last year Americans spent nearly $11 billion on over 8 billion gallons of bottled water. That’s a lot of water! Wanna know what they did with the empty bottles? They mindlessly tossed them in the trash, over 22 billion of them. The more than 70 million bottles of water which are consumed each day in America drain 1.5 billion barrels of oil, in the course of a year. 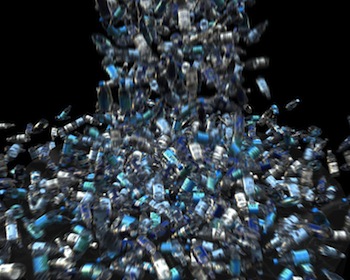 New York City residents consume nearly 28 gallons of bottled water each year. The city government launched an ad campaign to encourage residents and tourists to use the city’s tap rather than buy bottled water. New York City water is considered some of the best quality in the country. Classy restaurants in Boston, New York and San Francisco have taken bottled water off of the menu, offering rather filtered tap water.

Not only does bottled water contribute to excessive waste, but it costs us a thousand times more than water from our faucet at home, and it is, in fact, no safer or cleaner. A 1999 Natural Resources Defense Council study found that tap water may even be of a higher quality than bottled.

So why not make the switch? It is yet another win/win situation for person and environmental health!