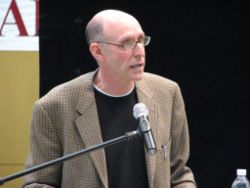 Human dietary habits, particularly in today’s modern ‘fast food’ culture, need to heed to advice – and warnings – by such people as Professor Michael Pollan (University of Berkley, Ca.) who’s writings and lectures concerning nutrition and proper foods are well known. An intense advocate of organic and natural foods, Pollan’s works include those dealing with human eating habits; especially those whom he categorizes as being omnivorous, i.e. those who eat both meat products as well as vegetables. His concern towards the American meat producing industry, in which a number of growth stimulating feeds and supplements are fed to cattle and other animals grown for food, creates an imbalance in the natural relationship between Man and his environment.

Professor Pollan considers humans to be grouped in three main categories: those who eat a largely vegetable and grain based diet; those who eat a mixed commercial vegetable and meat omnivorous diet; and those who hunt and gather for food. The relationships between the natural ‘food chain’ sequence, beginning with the photosynthesis of plants and ending in the consumption of meat by humans is a very import issue for Pollan as he feels that the modern “agribusiness” of commercial farming has lot touch with the inter-relationships of plants and animals by destroying import ecological relationships between plants and animals.

According to Pollan, both plants and animals have special relationships with each other, and in order for proper nutrition to be achieved, more organically friendly farming methods must be used. Too much emphasis is placed upon taste and appeal, and not enough on overall nutrition, he believes. In one of his essays, Unhappy Meals, Professor notes that most commercially produced foods are too much dependant on additives and taste enhancers. He mentions the American fast food business, which is causing too many people to become obese and susceptible to heart disease and cancer. Too much fatty meat products and not enough fish are being consumed, with the unfortunate result creating a society of overweight, unhealthy people.

Genetic engineering, that process of genetically manipulating growth processes in plants and animals, is too much the norm these days, according to Pollan. He believes that Man and Nature need to become more harmonious with each other; otherwise, the result will be nothing short of nutritional and ecological disaster for Americans. While some forms of genetic engineering may be good (for flowers, etc) those forms that incorporate the use of hormones and growth stimulants may be going against the existing laws of Nature.

Many of Dr. Pollan’s works can be found in archived editions of several newspapers and academic journals, as well as via the Internet.