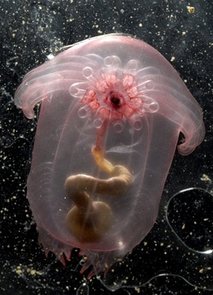 Are you one of those people who are fascinated by outer-space and the abysmal depths of the deep blue? One who lives for the mysteries? If so check out this news from the bottom of the ocean…

A report released last Sunday recorded 17,650 species living below 656 feet. This is the point where sunlight ceases. The creatures which live down there feed on the decaying matter which cascades down from higher underwater elevations – even sunken whale bones. They also feed on oil and methane. Researchers say that they’ve found 5,722 species living in the most extreme depths of the ocean – deeper than 3,280 feet.

In addition, more than 40 new species of coral were found living on deep-sea mountains, along with cities of brittle-stars and anemone gardens. There are also nearly 500 new species ranging from single-celled creatures to large squid were charted in the abyssal plains and basins.

Also notable were the 170 new species that get their energy from chemicals spewing from ocean-bottom vents and seeps. Among them was a family of “yeti crabs”, which are known for their silky, hair-like filaments on the legs.

Researching the abyss is costly and difficult because it involves deep-towed cameras, sonar and remotely operated vehicles that cost $50,000 a day to operate; but we’ll stay tuned and look forward to what scientists will find next.

Meanwhile scientists predict that there are easily more than a million species on earth and underwater which still remain to be discovered. On land, biologists have catalogued about 1.5 million plants and animals.