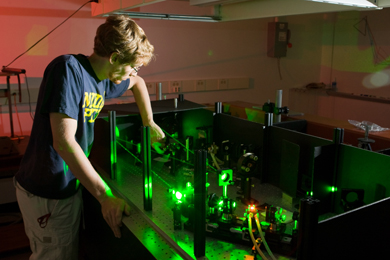 Researchers at the University of Michigan have made a discovery that presents a breakthrough in solar power generation.

Stephen Rand, is a professor at the University of Michigan and author of the report that discusses his team’s discovery in the “Journal of Applied Physics,” the researchers discovered a way to make an “optical battery” that harnesses the magnetic properties of light which, until now, scientists did not imagine amounted to anything.

The paper explains how light has both magnetic and electric components though, until now, scientists believed the magnetic field effects were so weak they could be ignored. Rand and his associates, though, found that at the right intensity, when light is traveling through a material not conducting electricity, the light field may generate magnetic effects up to 100 million times stronger than once imagined possible. Under such conditions, according to Rand, the magnetic fields become similar in strength to a stalwart electric effect.

A doctoral student in applied physics at the same university as Rand, William Fisher, says what makes this possible is:

In traditional optical rectification, light’s electric field sends negative and positive charges to be pulled apart in a material.

Before, this effect had only been observed in crystalline materials which possessed a kind of symmetry. This process works with materials like glass, though, presently requires light that surpasses the sun’s natural intensity.