Ever since Chicken Little tried to tell everyone “the sky is falling” people have taken advantage of the tasty little bird, especially those who like to eat at chicken fast food places Like Kentucky Fried Chicken, or KFC for short. This particular food chain has been under fire for quite a while because of the way it buys all those chicken ‘body parts’ that wind up being sold as regular recipe and “extra crispy” KFC meals to people all over the world, including places like Moscow and Tokyo Japan. 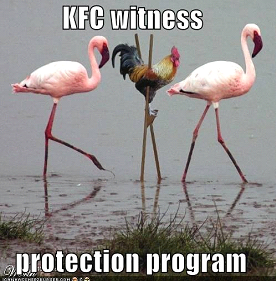 America’s talk show queen, Oprah Winfrey, has really taken it on the chin ever since she announced that her website that she is giving away coupons for free chicken dinners, KFC restaurants around America have been literally inundated with people coming with coupons in hand for a free chicken meal, including two side dishes and a fluffy, calorie packed farm-style biscuit. The situation has gotten so bad that many KFC places either ran out of chicken or had to turn people away without honoring the coupon.

Why would America’s most popular female talk show host want to offer such a deal is beyond the comprehension of most sane people, including those who are against the killing of millions of innocent fowl to satisfy the hunger of these people, especially when it was revealed that the poor victims, all relatives of Chicken Little, are often thrown into scalding water while still alive, clucking and all.

KFC executives have promised to look into the matter, although it appears that Oprah’s endorsed promo has come with their knowledge, as it certainly brings attention to the product they sell. But it also has brought out that these chickens are raised in giant, overcrowded “factory farms”, injected with all kinds of hormones and antibiotics to grow to larger sizes, and then “processed” in such horrible manners, which might make vegetarians of us all, which would make Chicken Little very pleased.

Oprah’s PR people might be wise to remove the promo ad before things really get out of hand and millions of Mr. Little’s relatives do a march on her studio in Chicago. Seriously, her PR department might reconsider her involvement with KFC, especially in light of so much attention being drawn to the matter of animal rights and animal cruelty.

Oprah is said to be against animal cruelty; but her personal opinions seem to have become lost along the way in her organizational hierarchy.

Factory farming has also been recently in the news in light of the swine flu epidemic, in which large swine raising farms in Mexico have been blamed as being the possible cause of the flu scourge which has spread over much of the world. I t wouldn’t be advisable for Oprah to offer a promo for BBQ ribs or other pork products after the “KFC chicken giveaway”.

Of course there is free-range chicken, like Chicken Little is said to be one of, but KFC suppliers wouldn’t be able to catch enough to satisfy the craving of all of Oprah’s fans.

One Reply to “No, Oprah, Chicken Little does not eat at KFC !”