It is becoming more and more clear, as the winter drudge rolls on, that Senate Republicans, amidst the endless days of health care reform fracas, will be able to deliver a knockout blow to another top Democratic agenda priority – that is the passing of a climate change bill in 2010.

Vindictive? Clearly. Though, not a shocker in a country where all is fear in love and politics. 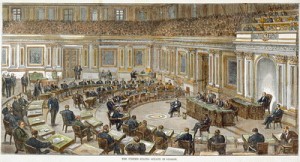 While certain Dems remain neutral or undecided on both issues, making it easy for Republicans to stand aloof, John Kerry, one of the few Senate participators at Copenhagen pledges to do exactly what President Obama vowed at the conference:

“Not a chance in hell that after the president put American prestige on the line in Copenhagen that the Senate is going to give this issue anything less than a major push…This is big — big — bigger than any individual agenda. Big. The 111th Congress is not a one-trick pony incapable of tackling more than one big issue, and the cost of tackling climate change would only grow if the Senate got weak-kneed and kicked the can down the road. Not going to happen.”