Being a professional storm chaser is such a dream job. The hugely popular movie “Twister” romanticized the profession back in the 90’s, and some people actually make a living out of chasing storms across the country.

Ryan McGinnis takes astonishing photos of storms. Something truly breathtaking. These are copyrighted photos, so I can’t show them here, but I suggest you drop a visit to his site and look at these stunningly captured seconds of life.

National Geographic always knows how to deliver amazing photos and mesmerizing stories. It’s a feast to the eyes. 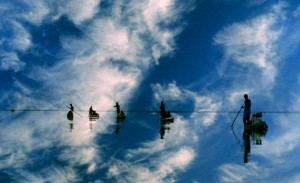 Chelsea Green is a lovable Green website, which features great articles and interesting merchandise, such as the book “How the Rich are Destroying the Earth”. The site also has a community of blogs and their own radio station.

GardenWeb.com has a beautiful gallery section which features dazzling photos of natural landscapes. I took a bit of time to explore their photo sets, and I recommend you do the same as well. It’s inspiring. 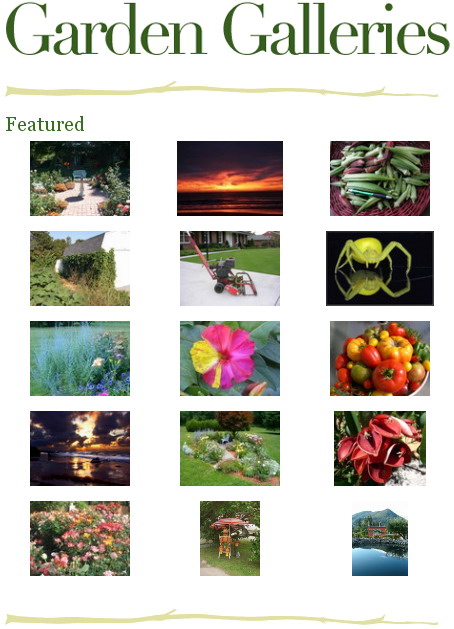 As a green blogger, I try to keep track as much as possible of other green blogs out there in the blogosphere.

I recently started following a blog titled Groovy Green and I just wanted to share this with you. It is a shared blog, which originated in Ithaca, NY, but has since expended to include international green news as well.

I want to make it a habit to mention other great blogs once in a while, and Groovy Green is the first of such recommendations. Hope you enjoy!

Gartner Group estimates that 40 percent of all carbon dioxide emissions resulting from information technology and telecommunications are attributable to PCs.

In other words, the electricity your computer consumes is attributing to global warming.
Turn it off when it’s not in use, or use electricity management applications to curb down your PC’s power consumption. 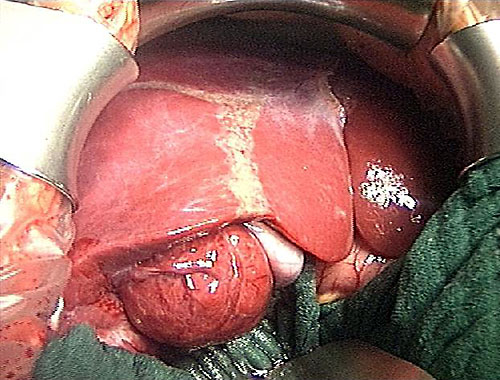 Only within the past couple of decades has the importance of detoxification of the body been made aware to most people. And this process of detoxification is very important in the liver, the body’s main “filtering” organ and one that is vitally necessary for survival. As we get older, accumulated toxins from the foods we eat (especially fried and “junk foods”) as well as taking abusive substances such as alcohol. What many people are not aware of is that the liver can be “cleaned” of detoxified by consuming a number of common plant products that are easily obtainable and cost very little. Some of these products are noted here as follows:

Curcumin is a common spice with a yellowish appearance that is used to flavor a number of foods, especially Mediterranean and oriental dishes. This spice contains antibacterial and anti-inflammatory agents that act as “cleaning compounds” on both the liver and the gall bladder, that smaller organ the produces the bile so vital to digestion and proper liver function. By using curcumin on a regular basis, both your gall bladder and liver will benefit, and will enable the liver to properly manufacture bile acids which are then stored in the gall bladder for later use. A properly functioning liver and gall bladder will prevent the formation of gall stones, which can occur when the bile stagnates in the gall bladder.

Grapefruit contains an antiseptic-like substance that reduces toxic substances often found in the liver, including a chemical known as acetaminophen (found in analgesics like Tylenol) and proven to be very damaging to the liver if used in large amounts. Grapefruit also has other benefits including preventing the formation of kidney stones and for reducing cholesterol levels in the blood.

Quercitin is a flavonoid that is found in a number of citrus fruits including grapefruit. Use of quercitin also helps reduce toxins in the liver and is also very effective against various forms of cancers, including skin and prostate cancer. Large quantities of quercitin is also found in apples, onions, berries such as raspberries and cranberries, and in the fruit of the prickly pear cactus.

N-acety-L-cysteine (NAC) is a powerful antioxidant that is partially found in high-protein foods, as well as in capsule form. NAC is considered great liver detoxifier and helps increase the body’s natural level of glutathione, a powerful anti-toxic agent in the body.

Methionine is an a-amino acid that is essential in proper food digestion as well as reducing toxins in the liver and other organs. High levels of methionine can be found in sesame seeds, Brazil nuts, fish, meats, and some other plant seeds, as well as in spinach, potatoes, and boiled corn.

Perhaps the most important aspect of keeping a healthy liver is simply by avoiding substances like excessive alcohol and acetaminophen, both of which are excessively damaging to the liver. Keeping your liver “clean” and healthy will not only make you feel good, but will prolong your life as well.

Global warming and the high price of crude oil has made the hybrid car an ecological innovation which is gaining immensely in popularity. For those who are not yet familiar with this new concept, a hybrid vehicle is a car or other type of vehicle in which two types of power, combustion and electricity, are used to provide more fuel economy as well as less exhaust emissions. A hybrid vehicle, or parallel engine hybrid to be exact, uses both a gasoline powered engine and an electric one to provide power. The two engines are usually mounted at opposite ends of the vehicle, with the gasoline powered one in front, and the electric one in the rear. Specially designed batteries are mounted in the floor of the vehicle, and they provide power to the electric engine to power the vehicle in more congested driving situations such as heavy highway traffic or city driving. By utilizing a concept of kinetic energy and special generators, the batteries for the electric engine are constantly being charged while the vehicle is in motion.

Some hybrid cars, such as the Toyota Prius and Lexus GS 450h, have specially designed transmissions to help conserve fuel when the gasoline engine is being used and to assist either the gasoline or electric engine with the power they need to travel at sufficient speeds on interstate highways and other motorways.

When the electric engine is being utilized to power the vehicle, not only is it more silent, but virtually no exhaust emissions are being emitted into the atmosphere, which is a great benefit against the “greenhouse effect”, largely responsible for global warming.

A hybrid car can achieve a fuel mileage capability of around 55 miles to the gallon as compared with even the most fuel efficient gasoline or diesel powered cars which average around 30-35 miles per gallon. The purpose of a hybrid drive system is two-fold: to improve fuel economy and to reduce polluting exhaust emissions of both carbon dioxide (Co2), which is the greatest contributor to global warming, and carbon monoxide which pollutes the air and harms people by reducing the blood’s ability to transport oxygen throughout the body. In addition to federal regulations to reduce the polluting contents of refined fuels, certain states like California have initiated very strict laws relating to exhaust emissions by restricting the amount of pollutants such as carbon monoxide from vehicles. For this reason alone, hybrid vehicles are becoming very popular in California and other states with heavy traffic congestion.

While not a perfect situation (electric or hydrogen powered cars have yet to be perfected for long range driving of at least 300 miles or 480 km) the hybrid car makes sense when gasoline sells for a average of $3.00 per gallon in America and even more in European countries. A good case in point is when New York City Mayor Bloomberg ordered several hundred hybrid SUV’s for use as taxi cabs in his city. So from a “green” or environment standpoint, the idea of the hybrid vehicle is definitely one whose time has come.

Organic wines, beers, and spirits have been gaining in popularity in recent years. Fermented or brewed to meet the dietary and taste requirements of the most discriminating organic products consumer, these products are appearing more and more in stores and supermarkets specializing in organic and biodynamic foods.

Vintage Roots, a U.K. based company, began it’s operation in 1986 by three young entrepreneurs who started their business on literally “a wing and a prayer”. Beginning in a house in Reading, outside London, they began with a ‘wine list’ of only 12 wines. Today, their company has grown to a staff of 12, and a wine list of 300 wines and champagnes, dozens of stout, pilsner and lager beers, as well as liqueurs, alcoholic spirits, and even organic sweets.

Their organic and biodynamic red wines, for example, contain no added sulfites, otherwise known as sulfur dioxide. Virtually all wines contain natural sulfites, which are derived from the natural fermentation process of yeast. Many wines, however, especially lower priced ones, have sulfites added to increase the wine’s “shelf life”. By choosing brands with no added sulfites, companies like Vintage Roots can assure their customers, especially those who are allergic to sulfites, that wines marked by the company contain as slow a sulfite content as possible.

Many organic foods consumers are also vegetarians, or vegans, who do not eat any food items containing animal derived ingredients. Many wine producers add substances such as gelatin and egg whites, which are used to make the wine appear clearer or “brighter”. Wines with the letters VG stamped on their bottles mean that these and other animal based substances are not used in the production of the wine.

Wines appearing on the Vintage Roots wine lists come from some of the finest wine producing regions in the world; including the Bordeaux region of France, Tuscany in Italy, and the Cape Province in South Africa. Virtually every type of wine can be found under organic production criteria, including red and white wines, rose wines, and several varieties of champagne.

Organic beers and ales presently offered by the company come mostly from the U.K. and Germany, both known for brewing fine quality beers. These products contain no products grown by the use of chemical fertilizers, pesticides, and other harmful substances.

For those wanting organic spirits, including organic liqueurs, Vintage Roots can offer a full range, including Scotch whisky, vodka, gin, and rum. Fine brandies and cognacs are also available.

Deliveries of wines and spirits are presently only to customers within the U.K.; with extra surcharges for deliveries to the Scottish Highlands, Northern Ireland, and various “off shore” islands (Channel Islands, Isle of Man, etc.).

This is a 25 minute show on medical matters.