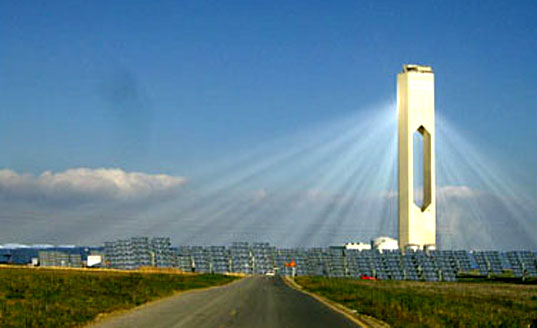 Seville, Spain is hosting the first commercial operation of solar tower technology, which features more than 1,000 freestanding heliostat mirrors, following the arc of the sun. In a process referred to as Concentrated Solar Power (CSP), the mirrors reflect solar rays to the tower, where water is boiled, and steam generated in order to drive a turbine, that produces electricity. The electricity is then sold to the national grid.

To make this happen, Spain’s government has provided incentives and subsidies supporting the solar industry. The upfront investment is enormous, and most of the money goes into building the plant. The investor community tends to see solar plants as high risk. After the economics of scale are achieved, solar power is one of the cheapest sources of energy. The report also makes the argument that it is quite difficult to detect the value of solar power currently.

When conventional sources of electricity are subsidized, it succeeds at artificially making them appear cheap. The magazine GOOD reported that “concentrated solar power…will be a core element of the transition from dirty coal to clean energy.”

“Solar has a huge role it can play, the fact that it’s an endless supply of energy…the one thing that’s needed to unlock much of that is the political leadership and will.”