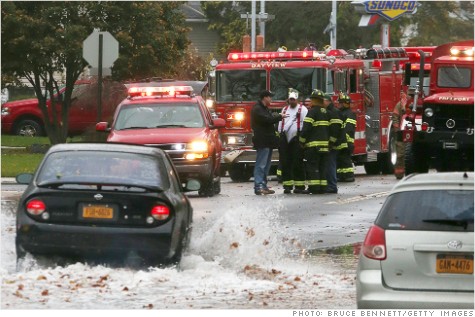 The East Coast lies in shambles after Hurricane Sandy demonstrated exactly why Mother Nature should never be underestimated.

Major cities that include Philadelphia, New York and Washington are in disarray with their streets completely overtaken by floods, fires and surges of seawater. So far, more than 16,000 scheduled flights in the region have been called off and nearly all ground public transportation transits have been crippled.

Wind gusts up to 80 mph have been recorded and at least 33 deaths have been reported across seven states. In addition, over seven million residents are currently without electrical power. Aside from human losses and injuries, the area is also expected to suffer from a massive financial toll. The total damage is expected to reach an estimated 20 billion dollars. The figure includes companies that have lost revenue due to employees skipping town and not showing up for work.

Sandy is not just another run-of-the-mill hurricane. When it approached the East Coast, it merged with the winter weather from the west and absorbed cold air from up north in Canada. The end result is what some meteorologists call a super storm; the impact left behind by Sandy shows exactly why the term “super storm” is a fitting name.

New York was one of the hardest hit cities. Wall Street was forced to shut its doors for two days straight. All K-12 schools remain closed and President Obama has declared the city along with neighboring New Jersey a disaster area.

For those who chose to remain in the area, they awoke to a scene reminiscent of a battlefield. Homes and buildings lay flattened with vehicles tossed about like they were rag dolls. Firefighters and emergency response teams reported chest-high water levels and had to resort to boats for rescue missions and scouting for survivors.