Dreamers imagine this: a form of electricity which emits to the atmosphere ZERO carbon dioxide emissions, while being affordable.
Dreamers imagining, you are engaging the vision proposed by MIT researcher Dr. Thomas Adams and Lammot du Pont professor of Chemical Engineering, Paul I. Barton. 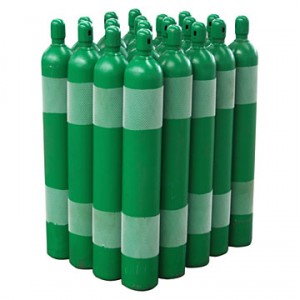 Their system uses solid-oxide fuel cells to produce power from fuel without burning it. The electricity generating system runs on natural gas, plentiful to the point of lasting approximately 60 years at current consumption rates.

Such innovations like these are what we are in such dire need of. As it stands today, natural-gas power plants produce an average of 1,135 pounds of carbon dioxide for every megawatt-hour of electricity that is produced; while natural gas accounts for only 22% of electricity production.

The system of solid-oxide fuel cells would eliminate harmful gas emissions, and only release pure carbon dioxide into the air. The process of carbon capture and sequestration (CCS) would store the carbon dioxide underground. The same cell system would also produce clean water, useable for a plethora of purposes.

Carbon Capture Sequestration involves separating out the carbon dioxide from other gases and injecting the potentially harmful gases into deep geological formations, keeping them from heading out into the atmosphere.

While the cheapest fuel will always be pulverized coal, the system designed by Adams and Barton comes fantastically close.

A very low level of carbon tax, about $5 to $10 per ton, would make the technology cheaper than coal plants. Combined-cycle natural gas plants, the most efficient type of fossil-fuel power plants, could be set up with a carbon capture system, thereby reducing the output of greenhouse gases by more than 90% at a comparable cost and even with a substantially higher efficiency. Once there is a form of carbon pricing, the true price exacted on the environment by greenhouse gas emissions will be known and seen by all.

Prototype megawatt-scale plants are planned for 2012. Once the system has been proved at any size, it may be increased to fill the need.
Ultimately an instance of innovation by and for the dreamers. 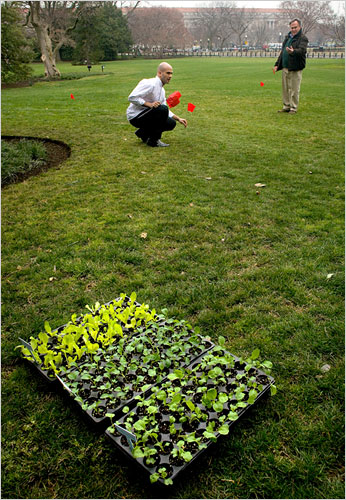 The down economy seems to be pushing us to a simpler and back to basics state of mind, which may turn out to be a good (dare I say it – great) thing. As more people are looking for ways to cut back on those expenses the coming warm season is going to see a surge in home grown produce. This trend was discussed here:

“We’re seeing a lot of new faces, a lot of questions that beginning gardeners have,” said Kathie Simmons, co-owner of G&M Pet and Garden Center. “I’ve had people say I spent so much on green beans last year, they realized they can grow them for quite a bit less.”

The Obama’s gardening plan is also a big push to the growing (excuse the pun) trend:

Michelle Obama will begin digging up a patch of the South Lawn on Friday to plant a vegetable garden, the first at the White House since Eleanor Roosevelt’s victory garden in World War II. There will be no beets — the president does not like them — but arugula will make the cut.

The effort will be significant and as a commitment will surpass the Clinton’s rooftop plants to something a little more significant:

The Obamas will feed their love of Mexican food with cilantro, tomatillos and hot peppers. Lettuces will include red romaine, green oak leaf, butterhead, red leaf and galactic. There will be spinach, chard, collards and black kale. For desserts, there will be a patch of berries. And herbs will include some more unusual varieties, like anise hyssop and Thai basil. A White House carpenter, Charlie Brandts, who is a beekeeper, will tend two hives for honey.

Gartner Group estimates that 40 percent of all carbon dioxide emissions resulting from information technology and telecommunications are attributable to PCs.

In other words, the electricity your computer consumes is attributing to global warming.
Turn it off when it’s not in use, or use electricity management applications to curb down your PC’s power consumption.

Here’s the unofficial explanation from Slug-Lines.com :

Slugging is a term used to describe a unique form of commuting found in the Washington, DC area sometimes referred to as “Instant Carpooling” or “Casual Carpooling”. It’s unique because people commuting into the city stop to pickup other passengers even though they are total strangers! However, slugging is a very organized system with its own set of rules, proper etiquette, and specific pickup and drop-off
locations. It has thousands of vehicles at its disposal, moves thousands of commuters daily, and the best part, it’s FREE! Not only is it free, but it gets people to and from work faster than the typical bus, metro, or train.

And here’s a teaser from an article titled “Stand in line. Ride with strangers. Zip past traffic to the city.“:

Commuters started slugging in Northern Virginia more than 30 years ago, according to the Virginia Department of Transportation. Commuters formed slug lines on their own, and no government agency oversees them.

With gasoline prices now averaging nearly $4 a gallon, the commuters at the Woodbridge lot said the practice is growing even more popular.

An estimated 6,500 commuters a day slug or pick up slugs, compared with 3,000 in 1999, according to Virginia Department of Transportation estimates. 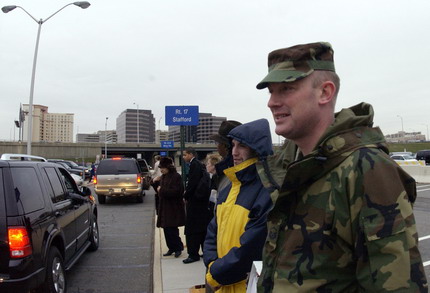 I already reported this week that the NASA Phoenix vehicle discovered water on Mars. But now it appears that the robotic lander has also confirmed the presence of a chemical known as Perchlorates. 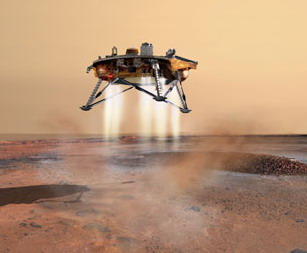 Perchlorates are the salts derived from perchloric acid (HClO4). They occur both naturally and through manufacturing. […] They are also used as an oxidizer in rocket fuel and explosives and can be found in airbags, fireworks, and Chilean fertilizers. […] Lithium perchlorate, which decomposes exothermically to give oxygen, is used in oxygen “candles” on spacecraft, submarines and in other esoteric situations where a reliable backup or supplementary oxygen supply is needed. Most perchlorate salts are soluble in water.

In other words, the perchlorates in the Martian ground can be transformed into oxygen! And it’s a good — although toxic — fertilizer for green vegetables.

The same folks who had won the Ansari X Prize for being the first private team to fly a vehicle to outer space and back — twice in two weeks — are now working hard on their next project: a commercial luxury jet that would take millionaires on a 24h flight into outer atmosphere.

Yes, I’m talking about Burt Rutan, and you may call his new adventure vehicle by the name of “White Knight 2”. 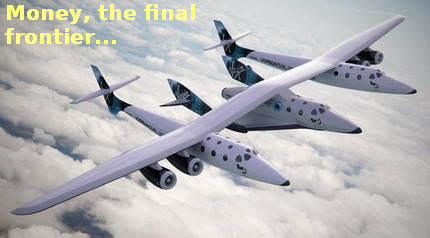 Have you got the money? Then this is one trip you’ll never forget. I’ll be watching Star Trek in the meantime.

NASA’s Martian vehicle Phoenix confirmed the existence of water on Mars while testing soil samples in the past week. How wonderful! 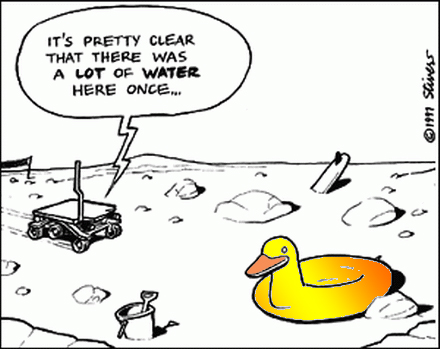 Photo taken from Origins of Life 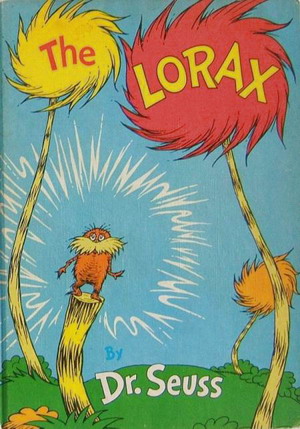 Way back in the days when the grass was still green
and the pond was still wet
and the clouds were still clean,
and the song of the Swomee-Swans rang out in space…
one morning, I came to this glorious place.
And I first saw the trees!
The Truffula Trees!
The bright-colored tufts of the Truffula Trees!
Mile after mile in the fresh morning breeze.

And, under the trees, I saw Brown Bar-ba-loots
frisking about in their Bar-ba-loot suits
as they played in the shade and ate Truffula fruits.

From the rippulous pond
came the comfortable sound
of the Humming-Fish humming
while splashing around.

But those trees! Those trees!
Those Truffula Trees!
All my life I’d been searching
for trees such as these.
The touch of their tufts
was much softer than silk.
And they had the sweet smell
of fresh butterfly milk.

I felt a great leaping
of joy in my heart.
I knew just what I’d do!
I unloaded my cart.

In no time at all, I had built a small shop.
Then I chopped down a Truffula Tree with one chop.
And with great skillful skill and with great speedy speed,
I took the soft tuft, and I knitted a Thneed!

The instant I’d finished, I heard a ga-Zump!
I looked.
I saw something pop out of the stump
of the tree I’d chopped down. It was sort of a man.
Describe him?… That’s hard. I don’t know if I can.

Current research says that more dangerous than the radiation your mobile device is emitting, the real danger results from the attachment of a hot device onto our heads — a habit that can damage our brains. 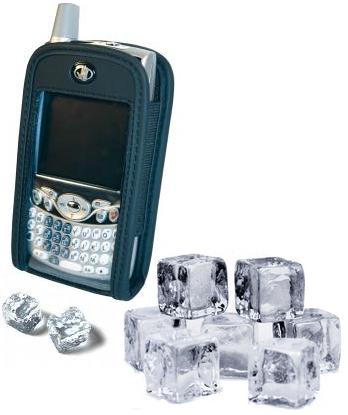 Therefore I suggest buying ice-packed cell phone cases. It’s not available yet on the market, but I’m sure it’s only a matter of time.

And remember, keep it cool. 😉

Depression is a terrible illness. It affects most of us at one point or another in life. But not many people know that several “thinking exercises” may be just as powerful as Prozac and other antidepressants. 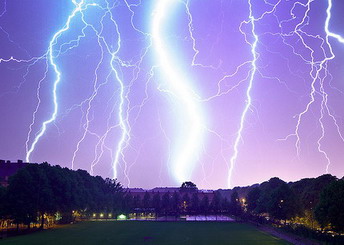 CBT stands for Cognitive Behavioral Therapy. It’s a therapeutic method for coping with and correcting maladaptive thinking patterns and behaviors. It has similarities with Buddhist Vipassana, since both techniques deal with increasing inner attention and with remodeling our semi-automatic responses.

Brainswitching is a specific CBT technique in which a person experiencing emotional distress divert his attention away from the emotional turmoil by concentrating on solving a rationale puzzle. In other words, instead of wallowing in thoughts such as “I’m so miserable” or “It’s never gonna change”, make yourself busy with some trivial logical exercises or games such as Chess or Sodoku, or simply sing aloud a happy song — anything to take your mind off the destructive thoughts that nourish the emotional turmoil.

In time, your brain will undergo desensitization of the depressive thinking-loop as it sees that you (intentionally) fail to respond to it.