This year’s first total eclipse of the moon will last an unusually long time. 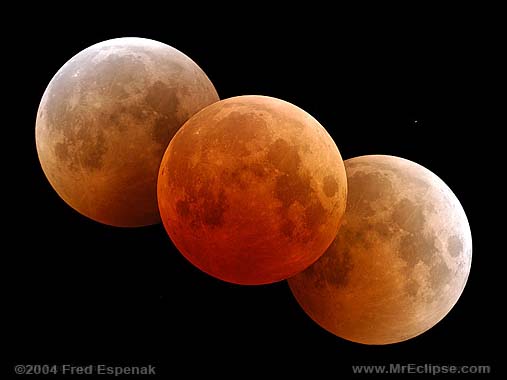 That is, unless you live in Canada or the United States. North America will not be privy to Wednesday’s lunar spectacle.

The period when earth’s shadow completely blocks the moon will last 1 hour and 40 minutes. The last time the moon was covered for so long was back in July 2000, when it lasted 7 minutes longer.

Normally, the full moon glows with reflected sunlight. A total lunar eclipse happens when the moon glides through the long shadow cast by the Earth and is blocked from the sunlight illuminating it.

As the moon plunges deeper into the shadow of the earth, the disk appears to gradually change color, turning from silver to red or orange. This is because some indirect sunlight still reaches the moon after passing through the atmosphere, which scatters blue light blue. Only red light hits the moon.

Because the moon will pass close to the center of the earth’s shadow, the total eclipse phase will last longer than usual.

The entire eclipse should last a little over 5 1/2 hours. Observers in Europe will miss the first part of the show because it will happen before the moon rises. Eastern Asia and eastern Australia will not catch the final stages, which will happen after the moon sets. Portions of South America will be able see the moon completely shrouded.

What happens to animals which have been removed from their natural habitat because of their status as endangered species?

“Limited attempts at predator reintroduction in the United States have for the most part proven very successful. The gray wolf, extirpated by hunters in the Yellowstone region some 90 years ago, is now thriving there in the wake of a controversial reintroduction program initiated in 1995, when the National Park Service released 31 gray wolves into the park’s expansive backcountry.”

The article goes on to say that since 1995, as many as 170 gray wolves roam freely throughout the park, though the elk population, which according to the article,

“Was denuding many iconic park landscapes in the absence of its chief predator — has fallen by half, in what many environmentalists see as a win-win scenario.”

Besides for this, there have been other successful reintroduction efforts in the U.S.:

“From the lynx in Colorado to the condor in California to the Black-footed ferret on the Plains, scientists are pleased with how well reintroduced species have taken to their new surroundings. As a result, many conservationists now view the reintroduction of iconic wildlife species as key to restoring otherwise degraded natural landscapes.”

“When we kill off big cats, wolves and other wild hunters, we lose not only prominent species, but also the key ecological and evolutionary process of top-down regulation…Wolves, cougars, lynx, wolverines, grizzly and black bears, jaguars, sea otters and other top carnivores need to be restored throughout North America in ecologically effective densities in their natural ranges where suitable habitat remains or can be restored.”

Although a representative from People for the Ethical Treatment of Animals (PETA) argues that:

“Reintroduction programs subject wild animals to capturing and handling, which is always stressful for them, and may eventually put them in the line of fire of farmers who are already angry about predator-reintroduction programs…when predators are reintroduced to an area where they have long been absent, prey species tend to scatter and their lives and behavior patterns are turned upside-down.”

Researchers were stunned last week when a gray whale was sighted in Israel. It is believed to be the first such sighting outside the Pacific Ocean in 300 years!

Typically, gray whales are only found in the Pacific Ocean. After years of hunting, they vanished in the North Atlantic around the 17th or 18th centuries.
In order to be spotted in the Mediterranean Sea, the gray whale traveled “a huge distance from its natural habitat thousands of kilometers away,” and one researcher said it was “bizarre in the extreme,” per BBC.

“There are really only two explanations: that there has been a relict population in the N Atlantic that no one has noticed (virtually impossible), or (more likely) that this whale came down through the ice-free Northwest Passage and is now hopelessly lost.” Ever see a lush, green, tropical-looking plant hanging out in the middle of the desert before? If you happen to live in a desert, say Arizona or somewhere, get some desert rhubarb – rheum palaestinum to the Latin buffs – and plant it in the sand. Then watch these huge biological rain tarps start to spread out with ridges that look like the Himalayas. Maybe, if you wait long enough, you can do desert harvesting and make a nice desert rhubarb pie. Don’t forget to add strawberries.

The physical structure of the desert rhubarb allows for it to maximize its use of rainwater, being about 16 times more efficient than other plants on average. But it’s not only the shape the does the job. As reported by Wired this month,
“When the researchers measured the plant’s water absorption during a light rain, they discovered that water infiltrated the soil 10 times deeper around the desert rhubarb than in surrounding areas. Upon closer examination, scientists discovered deep grooves around the plant’s veins, which are coated in a waxy cuticle that helps channel water down to the root.”

If you’ve ever been to a baseball game experiencing a rain delay, you’ve seen the giant tarp they spread out on the field. The rhubarb’s leaves are basically nature’s tarp. But don’t be confused – it’s not the fact that desert rhubarb can survive in the desert that is so unique. There are cacti, after all. Rather, it’s the fact that the plant looks like it’s something out of the rain forest with such a deep root system. Usually, those types of plants need to be rained on every day to sustain themselves. But evolution helped out here, and now we can really make the deserts bloom green.

I wonder what would happen if we actually did that. For now, I think I’ll find one and put it in my backyard. I’ll let you know how the pie turns out.

It’s amazing that this dog is able to walk around and move with two legs. She’s very lucky to be born under these conditions to someone who loves her and takes care of her. When you first look at the way she walks the first reaction is “poor circus dog” (at least that was my feeling) but then you realize she adapted herself to her condition. Amazing..

Nature is more amazing than the most advanced machines humans ever made. This next video shows a slow-motion lightning striking the earth at night.

Even though it seems as if lightning is a bolt of energy descending from the sky downwards, this conception is actually an illusion resulting from the speed of the whole process. In fact, as you can see in the video, a lightning starts with several “tentacles” that scout their way in the sky, in search of an electrical opponent. They are drawn to electrical fields on the ground, such as the electrical grid or mp3 players. When one of these tentacles touches the ground, the actual lightning forms, sending the current upwards, as a way to balance the unstable charge within the clouds.

Ouch! What a terrific shirt! 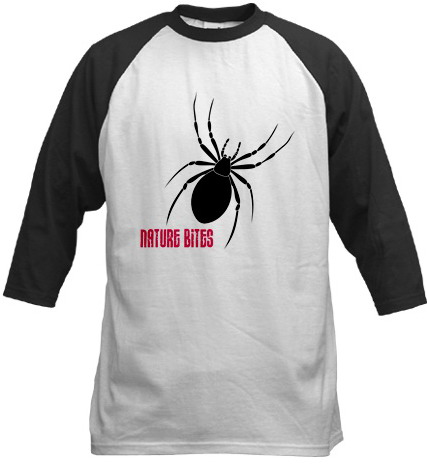 | View | Upload your own

Last week I described how the patterns of our brain waves control different states of consciousness. By altering these patters, we can induce many mental and emotional states, such as sleep, anxiety, calmness, and concentration. Several technological applications already try to take advantage of this mechanism for the treatment of humans.

As of today, we are able to transmit magnetic waves over a short distance that can manipulate a person’s state of consciousness. But as technology advances, we could one day broadcast a certain frequency over a broad area of space. When this becomes finally practical, it will certainly have many uses in the animal kingdom…

First of all, farmers could use this technique to ward off pesticides off their fields. Imagine a grasshopper that falls asleep when he’s nearing the edge of the broadcast-protected zone, or a bird that becomes anxious in the vicinity of her favourite fruit garden and therefore flies away.

Another possible application would be the improvement of dairy production. Cows could be excited during a certain time of day to make more milk, while enjoying a “good night sleep” at other times due to relaxing patterns, thus recuperating faster and better in time for the next milking.

Flies in the summer pose a major annoyance. But what if we could make them fall asleep when zooming past the garden fence. We will feel confident to sleep with the window wide open! Same thing goes for dogs that tend to bark excessively during the night. 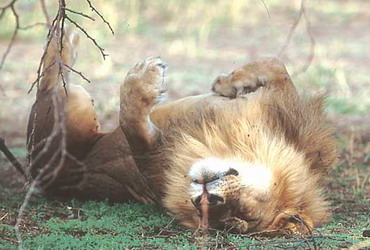 Have you ever fantasized about entering the tigers’ cage in the zoo and petting their beautiful fur? Doing it nowadays would mean becoming a tiger’s lunchtime dessert. But in the future, we could neutralize their aggressive behavior and killer instincts without putting them to sleep. They’d be awake and gentle at the same time.

And what about the monkey in the cage next door? He knows a few tricks, but it takes weeks and months to teach him those tricks. However, beta waves are known to be activated in humans when we concentrate. If we can induce beta waves (or their equivalent) in monkeys, elephants and dolphins — their training will progress much more easily and much faster.

In the jungle of science, the lion may very well sleep tonight.

Artists for Humanity is a unique center in Boston which hires teen artists to produce Eco-friendly art and furniture. These young people undergo an apprenticeship program in the summer or an after school program during the school year, and eventually get paid to create sustainable products for private and commercial clients.

It seem like a marvelous enterprise, and I want to feature a line of products made by these teens, titled “ReVision furniture“. 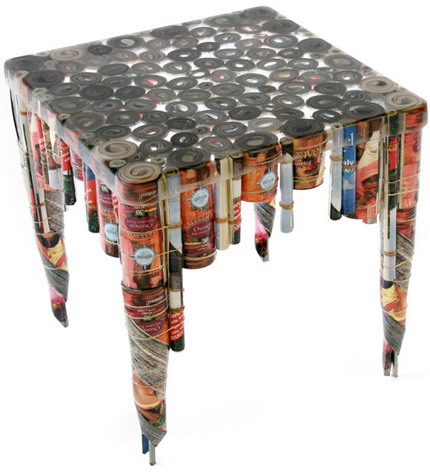 This table is actually made of reclaimed magazines, and aside from being a fully functional piece of furniture, it’s extremely beautiful… and I can just imagine some indie band players sitting at the local coffee shop on old-style sofas, on both sides of this hip-and-green signature table.
No sugar please.