According to NASA a newly discovered asteroid will experience a close encounter with Earth this coming Monday; but worry not – it will not spell disaster.

While it will come close, it is not a distance record holder. Earlier in the year, a tiny asteroid flew by even closer; that is within 3,400 miles of the Blue Planet.

The last asteroid measures 33 feet long and was discovered with New Mexican telescopes. Scientists say that asteroids this size can sail past Earth every six years.

The asteroid will briefly be seen rather brightly; well, that is bright enough such that medium-size telescopes may be able to spot it.

Researchers at the University of Michigan have made a discovery that presents a breakthrough in solar power generation.

Stephen Rand, is a professor at the University of Michigan and author of the report that discusses his team’s discovery in the “Journal of Applied Physics,” the researchers discovered a way to make an “optical battery” that harnesses the magnetic properties of light which, until now, scientists did not imagine amounted to anything.

The paper explains how light has both magnetic and electric components though, until now, scientists believed the magnetic field effects were so weak they could be ignored. Rand and his associates, though, found that at the right intensity, when light is traveling through a material not conducting electricity, the light field may generate magnetic effects up to 100 million times stronger than once imagined possible. Under such conditions, according to Rand, the magnetic fields become similar in strength to a stalwart electric effect.

A doctoral student in applied physics at the same university as Rand, William Fisher, says what makes this possible is:

In traditional optical rectification, light’s electric field sends negative and positive charges to be pulled apart in a material.

Before, this effect had only been observed in crystalline materials which possessed a kind of symmetry. This process works with materials like glass, though, presently requires light that surpasses the sun’s natural intensity.

Evan Mills, Ph.D of Lawrence Berkeley National Laboratory research has released a new independent report, “Energy up in Smoke: The Carbon Footprint of Indoor Cannabis Production.” Mills reports that indoor Cannabis production uses 1% of the entire electricity consumption in the country. The final sum is an energy expenditure of $5 billion per year.

While 1% may not seem like such a huge settlement, the report claims that smoking one single joint is the equivalent of running a 100-watt light bulb for 17 hours. That joint emits two pounds of CO2 emissions.

According to the report:

“Each four-by-four-foot production module doubles the electricity use of an average U.S. home and triples that of an average California home. The added electricity use is equivalent to running about 30 refrigerators. Processed Cannabis results in 3000-times its weight in emissions. For off-grid production, it requires 70 gallons of diesel fuel to produce one indoor Cannabis plant, or 140 gallons with smaller, less-efficient gasoline generators.”

The report does not editorialize on the issue of marijuana legalization and Mills says cannabis production is not intrinsically polluting, however, rather currently engages in inefficient production. Mills proposes energy use for indoor production could be reduced with cost-effective improvements of up to 75%.

Fast Company finds in the report further reason that marijuana should be legalized.

“Marijuana production needs to be legalized, so people will actually cast a critical eye on its energy usage. All the industry has to do is follow in the footsteps of the commercial agricultural industry, which has made strides in energy efficiency in recent years.”

“It is up to others to decide how to respond to the findings.”

Scientists in New Zealand did an experiment with wild insects that studied the common wasp, an alien invader to the island country, competing for food with the native ant species Prolasius advenus. 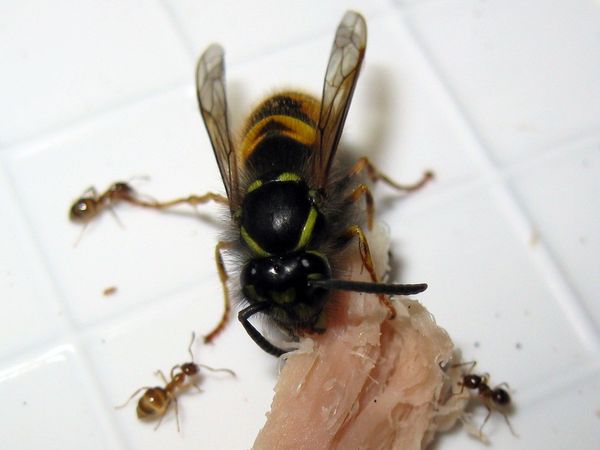 When the wasp approached a mound of food swarming with ants, it would pluck an ant from the pile, fly a ways off, and drop the living insect from its jaws.

Common wasps (Vespula vulgaris) are native to North America but were introduced to New Zealand in the 1970s. The wasps eat nectar and other insects, capturing live prey or scavenging.

This led to the establishment of an experiment where wasps and ants were presented with samples of high-protein food: little chunks of tuna fish.

The samples were placed at 48 stations in a natural beach forest; cameras were set up near each one. Both ants and wasps visited 45 of the 48 stations, and the cameras recorded 1,295 interactions between the insects.

Most of the time, the ants and wasps avoided one another. Although, the researchers documented 341 cases when the ants were aggressive toward the wasps, charging, biting or spraying them with formic acid; a natural defense mechanism.

In only 90 encounters the wasps were the aggressors, including 62 cases of ant dropping. The researchers suspect the other 28 times were ant-dropping attempts which the wasps botched.

In the majority of the cases, the wasps’ ant-dropping behavior was unprovoked, ants being grabbed and flown away. Sometimes the ants were unruly before they were grappled and carried off.

The team argues that the acid defense may be why the wasps “ant drop” rather than just killing the smaller insects outright.

Scientists say they discovered the first fossil of a dinosaur in Angola. 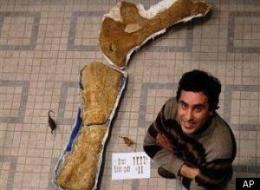 The animal was a long-necked, plant-eating sauropod, one of the largest creatures ever to have walked the earth. The fossil was found alongside fish and shark teeth in what would have been a sea bed 90 million years ago, leading its discoverers to believe the dinosaur might have been washed into the sea and torn apart by ancient sharks. The dinosaur was dubbed Angolatitan adamastor – Angolatitan means “Angolan giant” and the adamastor is a sea giant in Portuguese sailing myths.

“I think they’ve been very careful…The neat thing about dinosaur paleontology is that it’s becoming more global…The more people and places that we involve in science, the better off we all are…”

This was the first archeological expedition in Angola in 70 years. An anti-colonial war broke out in that country in the 1960s; civil war followed independence from Portugal in 1975.

PaleoAngola member Octavio Mateus of Portugal’s Universidade Nova de Lisboa and Museum of Lourinha indicated a lack of money has been the major barrier to research.

Tatiana Tavares of the Universidade Agostinho Neto is also on the PaleoAngola team, and her Luanda, Angola university has Angolaitan adamastor fossil specimens on display publically. Other specimens in Portugal are to be returned later to the university.

Thunderstorms are able to shoot beams of antimatter into space; beams that are so intense they may be seen by spacecraft thousands of miles away.

Matter is made of subatomic particles such as protons and electrons. Whereas, antimatter is made of particles that have the same spins and masses as their counterparts though with opposite charges and magnetic properties. 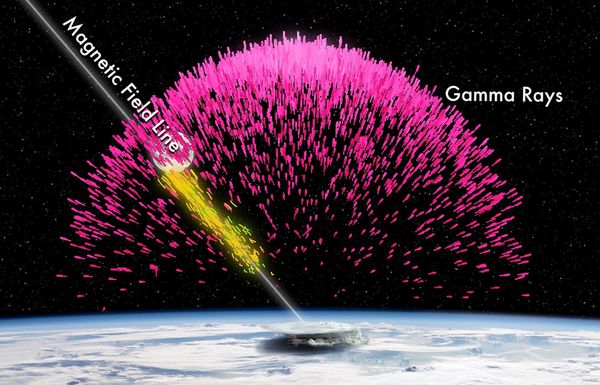 Radiation detectors, recently, on NASA’s Fermi Gamma-ray Space Telescope lighted up for roughly 30 milliseconds with the characteristic signature of positrons, the antimatter counterparts of electrons.

Scientists were able to trace this burst of concentrated radiation back to a lightning flash over Namibia in North Africa, some 3,000 miles away from the Earth-orbiting telescope, which was passing above Egypt at the time.

“This is a fundamental new discovery about how our planet works…The idea that any planet has thunderstorms that can create antimatter and launch it into space is something out of science fiction. The fact that our own planet is doing it is truly amazing.”

It is already common knowledge that thunderstorms emit gamma rays, (the most energetic form of light), and that gamma rays may create positrons via the process of pair formation.

When a gamma ray that has the right amount of energy interacts with an air atom, energy from the gamma ray becomes converted into matter, one positron and one electron. Scientists, though, wouldn’t have been surprised to see a few positrons accompanying any intense gamma ray burst. The lightning flash detected by the Fermi, however, appeared to have produced about 100 trillion positrons.

This planet constantly gets bombarded by radiation from the sun, as well as cosmic rays from distant however violent events, like powerful supernovae.

Considering the amount of positrons in the beam that was detected by the Fermi, the thunderstorm was briefly creating more radiation in the form of positrons and gamma rays than what hits actually hits this planet’s atmosphere from all other cosmic sources combined.

“We really don’t understand a lot of the details about how lighting works…gives us a very, very important clue as to what’s happening.”

Found in limestone once destined for Italian kitchen counter-tops, are fossils that may have belonged to an unknown ancient crocodile species.

The fossils were originally discovered in 1955 in Ferrara, Italy, in a limestone quarry, when workers sliced a huge block into four slabs and found the bones trapped inside. 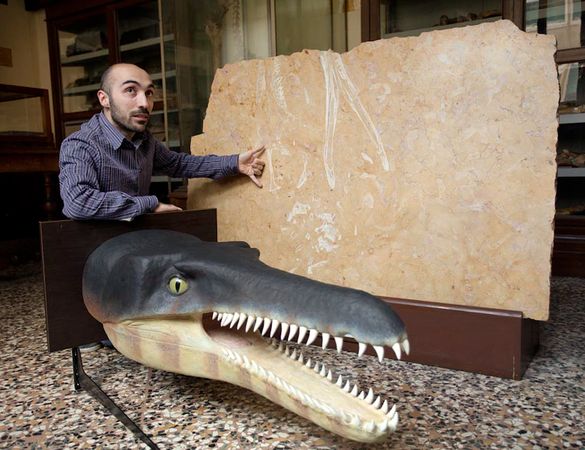 Before the slabs were transferred to two museums in Italy, scientists performed a cursory examination of the fossils, enough to determine that indeed they belong to an ancient crocodile.

A more recent analysis of the embedded bones shows a skull and a few vertebrae, belonging to a previously unknown species of 165-million-year-old prehistoric reptile, now known as Neptunidraco ammoniticus.

The animal turned out to be the oldest known member of Metriorhynchidae; a family of ancient marine crocodiles which walked the earth’s oceans for about 30 million years before going extinct,

Scientists feel that Metriorhynchids split with modern crocodile ancestors about 200 million years ago. Unlike the crocodiles of today, which have semi-aquatic lifestyles, scientists think N. ammoniticus was a fully marine predator which rarely came on land.

The 13-foot animal was comparable in size to modern crocodiles, though had a more hydrodynamic body, a more streamlined skull and a vertical tail that resembled those of fish or sharks.

Based on previous fossil discoveries of other Metriorhynchids species, researchers also suspect N. ammoniticus had flippers. Like dolphins and whales, they had to swim to the ocean surface to breathe, and not unlike sea turtles, they may have mounted up onto beaches once a year to lay their eggs.

N. ammoniticus was not an alpha predator among its ancient marine counterparts, but by today’s standards would be feared. For example, the crocodile cousin was dwarfed by top ocean predators like the short-necked plesiosaur Liopleurodon, which could grow to more than 80 feet.

Actually, fossils of Metriorhynchids have been discovered throughout the world, which suggests they roamed widely across ancient earth’s oceans.

Because of the size and shape of their teeth, it is hypothesized that Metriorhynchids such as N. ammoniticus fed on fish and squid and perhaps other sea reptiles.