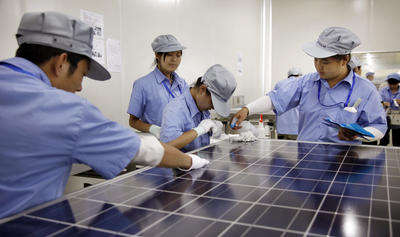 Trade wars initiated by trade sanctions are nothing new. In fact they happen in many industries, especially those that are highly competitive. But it may be a surprise to learn that a trade war over solar panels may be about to begin, over potential sanctions put on China imports. What is already happening in many other industries may bleed over into the renewable energy business, and this could have severe consequences on US customers who want to adopt a green energy system and install solar panels, and may affect a lot of jobs.

It all started when SolarWorld, a German based company operating in the US, filed a complaint with the trade commission on behalf of all the US based solar panel manufacturers. The complaint said that China manufacturers were getting major subsidies from their government and dumping these panels in the US at a much lower price, so that US companies couldn’t compete.

This isn’t a new story, and it’s something that happens all the time in all sorts of industries. Trade is governed by a series of treaties, and one stipulation says that while a manufacturer in one country can sell its goods in another country, if that company gets an unfair advantage, such as having large government grants, then it’s unfair to the companies in the second country who do not have that advantage. That’s when a complaint is made, and when trade tariffs are added. Any time an imported product, such as lumber wood, food, etc, has a special tax added onto it when it comes into the country, it’s usually because of these trade sanctions.

Here, solar panels have so far been clear of sanctions, until now. The government will need to review the complaint and make a decision. Either it’s not true, and everything will stay as it is, or Chinese companies are getting an unfair advantage, in which case the rules of the game may change. But what does it mean for US customers? Well, it means China based solar panels will suddenly raise in price, for a start. So higher prices are clearly on the horizon, which is obviously bad news. However, the reason for these trade sanctions is that without them, US companies couldn’t compete, which means they might go out of business, and a lot of people may lose their jobs. So with these higher prices, you may see companies stay in business. In fact, what often happens is that they now get room to grow, and local employment goes up. So it’s a double edged sword.

As you can imagine, the possibility of trade sanctions is a very hot topic, and a lot of people are upset with what SolarWorld did. There’s people and companies arguing on both sides of the fence, and ultimately it’s the government that will need to make a decision in this case. It could take a while however, a few years in fact, but there’s little doubt that this situation will not go away until a final decision is made.